Alumni Reflect:
Moving Into the Co-ops

This month, our BSCAA members contributed memories regarding “Moving Into the Coops.”

If there are topics you’d like to see in future editions, please email us at bscaa1996@gmail.com.

“Moving Into Barrington Hall Fall 1978: During my freshman year I lived in a rooming house in what had been and is now a fraternity. One day in the Spring I saw Lois Kochan, one of my classmates at Lowell High School in San Francisco. She loved living in the USCA and I went and applied. I moved into Barrington the day before school started Kenny Abiko was the House Manager and showed me a couple rooms. The second was the walk through double in 208 which was on the second floor at the Haste Street end across from the tennis courts. Robert Pisani had almost finished painting the walk through black on the walls and ceiling with the Dark Side of the Moon on the two long walls. On my arrival he offered me a smoke. I made the decision that this was the suite for me. I ended up living in 208 for the next three years except for one quarter. I can see Bob almost any weekday and we have seen each other over the years.”

“Who can possibly forget the first two weeks in their co-op house?! It’s made of memories that are burned into our brains. You’ve just left your childhood home and nuclear family to live with 20 to 150 strangers in a house with multiple stories, interesting smells and divergent personalities. Older co-op members take you under their wings to help you sign up for workshifts, help you sort out class schedules and find the best classes, introduce you to everyone in the house and teach you how the house operates under its democratic rules. Within those first two weeks you run up and down the stairs many times a day, ignore dirt, appreciate meals shared and learn your roommate likes to talk till 2 am (Love you, Vicki!) Who would guess that within those first two weeks you’ll meet the friends you’ll treasure for the rest of your life?”

“I discovered Cloyne Court nearly TWO YEARS before finally being able to move in: my Freshman year at Cal, a group of British study abroad students of mine stumbled into my Foothill room one night and told me we simply had to get down the street and into some revered “Pirate Party” they’d heard about. We did in fact get in, and the party was in fact glorious, and I knew I had to find a way to live in that massive shake-shingle building after meeting there some of the most fun and clever people at the University. I immediately put myself on the waitlist and proceeded to spend the next year lurking around Cloyne and dating (we used that term loosely) various residents the year prior while pretending (not very subtly) that I lived there. When I finally, officially was able to move in my Junior year, it truly felt like I’d made it home. My reigning memory of move-in day itself is of having way too much stuff to fit in the room I was going to be sharing and gleefully taking selfies amidst the mess because I was too happy to worry about dealing with it–there were parties already starting in the courtyard! I met some of my favorite people at Cloyne–including my fiancé–and the memory of basking in that sun-soaked courtyard with new friends and realizing I was now sharing a home with some 150 strange and brilliant people is one of my fondest single moments to this day.”

“Barrington Hall, 1974, Move-in Day. What I remember about Move-In was having my Dad drop me off with a large duffel bag of clothes and several old cardboard boxes with the “electronics of the day”. A clock radio, a cheap stereo and a few books. I had just started back down when I ran into another student’s mother carrying her small white dog and calling after her daughter in Czech. I don’t know if her mom was more worried about her or the dog, but I have remained friends with Vera for over 40 years. John Ehrlich and Nancy Blattel, current BSCAA board members were also there and we are working together again. My first work shift was ad hoc, cleaning out a closet formerly occupied by the famous “Pink Cloud”. I finally settled on doing the Sunday Brunch, since you could get your whole shift done in one long session, I soon found out it was a great way to meet my fellow Barrington denizens and start making friends. I certainly did more learning in those first few weeks after move-in at Barrington then I did in the hallowed halls of U.C. Good Luck to all of the students moving in soon!”

“Moving in to Davis House in 2004, on my first day in the coops. I wandered into the TV room, and there was a rad VHS collection including a box set of the X-Files and a copy of Nowhere (1997). Someone had slapped a sticker on top of the TV that said ‘READ A FUCKING BOOK.’ It was then that I knew I would surely feel at home.”

“I lived at Barrington Hall from 1966 to 1969, followed by a year at the Northside Apartments. I was House Manager for two quarters, Fall 68 and Winter 69. My introduction to California was a window seat on the California Zephyr, arriving in Oakland after watching the yellow, brown and black Sacramento Valley (dead grass, no grass and burnt grass) pass by. Then it was a Western Pacific bus over to San Francisco. Checked the footlocker in the left luggage and walked up Eddy Street to stay over at the YMCA. Day two was a bus trip, the F bus, over to Berkeley and a walk up Dwight Way to find out that Barrington would not be open for a few days, but I could stay at Cloyne Court. That’s where I met Ray Adams with whom I would later share a Northside Apartment. Back to Barrington to get a room assignment meant standing in a line watching for Mike Jang and Terry Jue ‘administer.’ This was the first time I really dealt with Chinese-Americans of their directness. Let’s just say that in North Bergen, NJ diversity meant different religious affiliations. That day was when I first saw Mike with his hand motion, done while doing gymnastics with a cigarette that migrated back and forth seamlessly between an ash tray and his lips. Terry was voluble, enthusiastic and ready to make decisions that Mike would then act upon. The result was the double in Room 309. Several years later, when House Manager, I remembered how little the information had been provided on getting to Barrington, especially avoiding that second F bus ride with a footlocker not meant for carrying, and I sent all of the new people a personal letter with a welcome and directions. Wonder what they thought of Pam and me when we were assigning rooms? No cigarettes.”

“The first night at Cloyne after moving in was one of the most exciting times I can remember. Meeting all my new housemates, and realizing I was now living in this amazing space gave me such a sense of happiness, community, and possibility. At my first counsel, the former house president passed a huge bong to the incoming president who then proceeded to take a huge hit in front of the entire house and yell “Welcome to Cloyne, f***ers!” I knew I was home.”

“I moved into Barrington Hall in the fall of 1973. The house manager, Ed Weil (who would later become my husband) showed me the available rooms. I picked the one that was painted in different shades of purple. He said not everyone liked the paint job (I loved it). My parents were with me. My father liked it and said it reminded him of his fraternity at Iowa State. My mother was lagging behind the group. I asked her what was wrong and she said, ‘It’s just so DIRTY.’ I told her I thought it was great and I would keep my room clean. I heard later from my brothers and sisters that when she got home she called them all together and told them, “Nancy is living in a rat trap.”

We’re able to fulfill our mission thanks to our alumni members! If you’re not one already, please consider joining the BSCAA as an annual or lifetime member. Feel free to reach out to us at bscaa1996@gmail.com or (415) 685-3943 with any specific questions; we’re happy to chat. 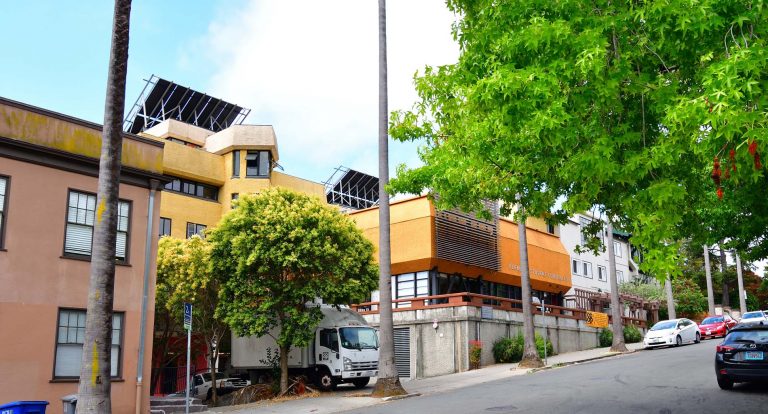